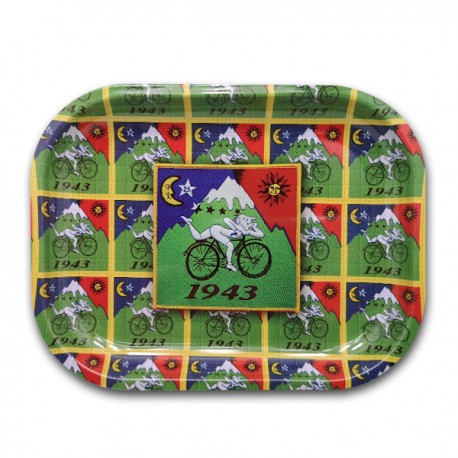 Ideal to use as a support point and not lose the paper or nozzles. Without a doubt, this design will make lovers of LSD and scientific studies fall in love

(Discover the anecdote of this story in the text below)

April 19, bicycle day, is used by all cyclists to claim their rights as users of this transport and gain a foothold in the streets, but the origin of this day has nothing to do with sport or with bicycles and not with the fight for the rights of cyclists.

It was the year 1943 and the chemist Albert Hofmann known as the father of LSD for his experiments with said drug, which at that time he was investigating and synthesizing for the first time. During these tests, on April 19, 1943, Hofmann acted as a guinea pig, ingesting a dose of 0.25 milligrams of LSD (lysergic acid diethylamide) to see what psychotropic effects the drug would have on a human being.

Hofmann, shortly after ingesting the LSD, began to suffer alterations in reality and perception and asked his assistant to accompany him to his house. In 1943, due to the war, motor vehicles were prohibited, so they returned home on bicycles.

During the bike ride through the streets, Hofmann's mental clarity began to deteriorate and he began to see visions, like his neighbor turned into a witch, kaleidoscopic shapes, spirals and fantastic images that pounded into his brain non-stop, thinking that LSD she had poisoned him and that he was going to go mad.