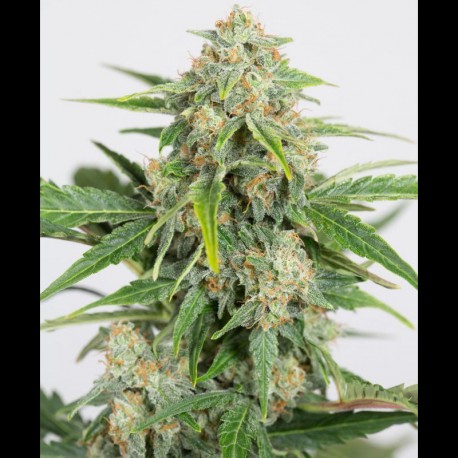 Therapeutic & autoflowering marijuana seeds. Variety very easy to grow and fast flowering, which produces plants of shrub structure rarely exceeding 100 cm in height. Its flowers are compact and resinous, with sweet aromas and earthy notes that contain lower levels than 1% THC and can reach up to 14% CBD, obtaining only a relaxing body effect.

Dinamed CBD Autoflowering is a feminised and autoflowering cannabis seed conceived as the quick version of Dinamed CBD, which was the first CBD pure strain of history with approximately 14 % cannabidiol to be created by our team of breeders in 2017. With almost no psychoactive effects, THC levels lower than 1 % and multiple therapeutic properties derived from her high CBD content, this strain was created for medical purposes. However, when marketed, we found out that not only therapeutic patients but also recreational users loved this plant that smells and tastes of marijuana but doesn't get you high like cannabis generally does. That's why we have decided to release a far quicker and easier-to-cultivate version of Dinamed CBD: an amazing autoflowering to bring CBD closer to all kinds of growers.

Dinamed CBD Autoflowering is a cannabis seed that turns into a mid-sized, compact and bushy marijuana plant. Her broad and serrated leaflets, as well as her short internodes, make her look like an Indica plant, at first glance at least. Indoors, she could reach 110 cm in height, while outdoors, in optimal conditions, she’ll grow no more than 1 metre. For all these reasons, she makes a marvellous choice for growing in small spaces or for when discretion is a priority. A city balcony or a small space in the house should be enough for this plant to show her full potential in less than 70 days.

Dinamed CBD Autoflowering produces incredibly rich crops with 14 % CBD and THC levels lower than 1 %. Like most autoflowerings, this strain is not famous for the great deal of flowers she produces because she is indeed smaller than photoperiod plants. However, each plant can produce up to 100 g of dry weed, which is quite an achievement if we remember than she only needs 2 months from germination.

So this strain is the clear example of how sometimes the best things come in small packages: no matter her yield being lower than some feminised genetics’; we won’t find higher levels of this cannabinoid in any other seed of our catalogue.

Dinamed CBD Autoflowering hides a very nice surprise when it comes to her tastes and aromas. While most cannabidiol-rich strains showcase subtly orangey undertones, this cannabis plant is highly fruity. More sweet than citrusy.

The effect of Dinamed CBD Autoflowering on our organism is what makes this strain so special because her almost 14 % CBD levels are indeed very high and this, of course, has some extraordinary consequences. In order to understand what this strain is capable of, it’s necessary to draw a distinction between two types of consumers: therapeutic and recreational.

Here lies the main advantage of Dinamed CBD Autoflowering over Dinamed CBD. She’s super easy to grow: she’s far less demanding than her predecessor and much quicker than Dinamed CBD. As long as she receives enough direct light, the pot she’s being grown in is sufficiently big (we recommend using pots of at least 7 L) and she’s continuously watered and fertilised, this high-cannabidiol plant will provide amazing results. Due to her short 60-70-day life cycle, she can be harvested in summer (germinate by the end of May in the northern hemisphere).

There are only two things we should bear in mind if we’re to obtain optimal results: