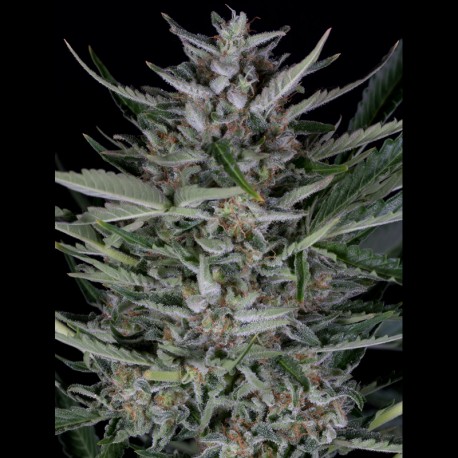 Autoflowering version of the powerful and sticky Gorilla, which has been achieved after crossing it with OG Kush Auto leaving in this variety a more marked gas flavor. Medium sized plant with good branching and spaced internodes, perfect for aerating your resinous buds. Its harvest comes after 70 days of life, leaving an average - high production of buds laden with resin.

Those who have not grown Gorilla for fear that the winter will be on top without having even matured the buds, or those who do not want to depend on light changes to cultivate a high potency cannabis jewel, will find in this genetics the plant they were looking for. Because its automatic status does not diminish the enormous resin production of the original version, nor the intense smell of gasoline, nor the narcotic sensation of one of the most devastating indica.

Gorilla Auto is a hybrid of medium indica cannabis, half ruderalis. It is a medium plant, which makes it a variety capable of developing well in small spaces, able to remain discreet in balconies or gardens. Despite its quite shrubby shape, its internodes are wide enough to allow proper ventilation inside the plant, and let the light enter even the most closed parts, avoiding problems due to moisture concentration. To this it contributes that its leaves are not too broad or fleshy, and allow the penetration of air without difficulty. Regarding its color, it remains very faithful to that of the feminized Gorilla: a lime green color, dyed white in the last days of flowering, around the buds, fruit of the resin.

The harvest of the autoflowering version of Gorilla is relatively similar to that of its feminized predecessor. Of course, if the objective is to grow large plants outdoors, the car is not the best option, given that thirty days after its germination, more or less, the specimen will begin to bloom, without the possibility of lengthening the vegetative period. In addition, as is typical of this dynasty, the maximum attribute of the production is the resulting resin. Their ruderalis genes do not stop the production of trichomes and resin amounts remain very high in this autoflowering version.

Gasoline is the predominant note of Gorilla Auto. If Gorilla already remembered Diesel, when crossing it with an OG Kush Auto the oil notes are accentuated.

Even though THC levels are not low and can reach levels of 19%, we are not facing a devastating variety. If its predecessor was a genetics of a very high power, this auto version reduces to some extent the intensity of the effect. Of course we should not underestimate it, because it is still a strong sensation, which at first has more euphoric consequences, and then becomes more narcotic and relaxing.

Within the Gorillas of Dinafem Seeds, this is the simplest to grow. No dependence on photoperiod, fast and robust, Gorilla Auto is ready to harvest in about 75 days, after germination. If there is no experience in the cultivation of cannabis, this genetics can offer great joys without major worries due to its ruderalis genes. Obviously, it will appreciate temperate and warm climates, and a good number of hours exposed to the sun, will increase the size and production. But it will also be able to develop in more hostile climates, without being charged for the lack of light or heat in the harvest.