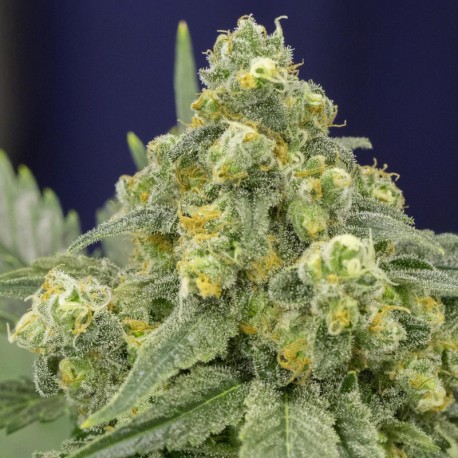 Powerful Indica-dominant marijuana strain that dominated the Dutch cannabis market during the 90's and is still the favorite of many growers. White Widow grows vigorously with short internodes, creating long, thick clubs of resin-coated buds that exude fruity aromas. Its flowering ends after 8 weeks at 12/12 leaving up to 600 gr/m2.

White Widow is a dominant Indica that emerged in Holland in the mid-90s of the 20th century, during the golden age of Amsterdam. It is known for its potency and the density of trichomes it produces, hence the name, which literally ends up covering the plant's tissues with a thick white layer.


When it comes to talking about an Indica type plant, White Widow is the perfect example. Its growth pattern is compact, with short internodes, typically broad leaves with well-defined tips, and an overall fairly rounded, bushy appearance. It is a very versatile and easy to grow plant. The only thing to keep in mind is that, in indoor crops, it is advisable to monitor the humidity and keep it below 55 - 60% to avoid mold problems. Outdoors it is preferable to grow it in a warm climate, especially Mediterranean, as it needs a lot of light and rather dry air.


White Widow is an excellent choice for growers looking to make any type of resin extract, as it packs an impressive amount of trichomes for a cannabis plant. Its bud production is also good, yielding up to 550 grams per square meter indoors and up to 900 grams per plant outdoors.


The cross retains all its charm of yesteryear, thanks to its intensely fresh floral aroma. White Widow's effect has legendary status in the world thanks to its calming and therapeutic properties. Produces a powerful Indica effect that causes a deep and lasting physical relaxation. This classic is still very current and relevant today.