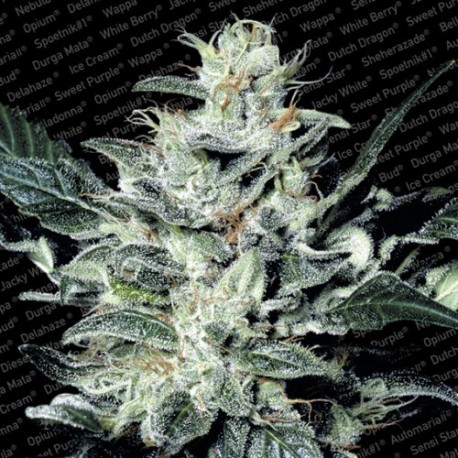 This indicates to innumerantes awards is one of the strongest you can try. Its effect is brutal with a scent and taste lemony / metal. Indoor flowering time: 56 to 63 days; harvest outdoor: early October.

It's a great plant, producing powerful and very compact buds, crowned with legendary amounts of resin. Although mostly indica, she retains a complex high that warps both body and soul.


Introduced in 1995, this strain 's stability was improved in 1997 to deliver a strong plant with big fan leaves and thick buds . Sensi Star works well in a sea of green with about 20 plants per square meter . It is best to let them grow about 2 weeks before entering the light cycle 12/12 . If the strong side branching is allowed to flourish , you need a little extra space . Hydroponic and soil methods are equally suitable . Prospects for gardening this plant outdoors are good in temperate zones , which will reach approximately 2 meters and produce an average of 400 grams in a successful season .

This headstrong indica produces rock hard colas that have a lemony / metal scent and taste . This strong characteristic fragance speaks for itself. Some smokers find the buzz very strong , while others report a high more energetic cerebral properties as well as a sense of wellbeing. THC levels have been reported in about 20 percent of this variety . She is one of the best strains of cannabis in the world .

Type: Mostly Indica with a hint of Sativa

Sensi Star is one of the strongest Indica's you'll ever find .